European Organ-on-Chip Society (EUROoCS) was represented during a three-day workshop in Berlin in June 2019, where 46 leading experts gathered to identify the challenges and hurdles as well as the solutions for the adoption of Microphysiological Systems (MPS), including Organ-on-Chip models. 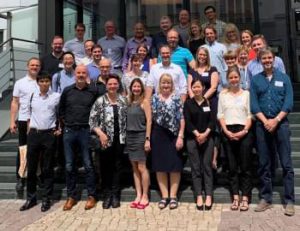 In an open discussion the representatives from all stakeholders, including academia, MPS supplier industry, pharmaceutical and consumer products industries, and leading regulatory agencies worldwide discussed the state-of-the-art of the technology, the research highlights, the industrial application in drug development, the barriers for acceptance, the community-building initiatives, the regulatory and ethical dilemmas and the future perspectives.

Qualification and testing of MPS-based assays have been recognized as major challenges. Independent testing centers were promoted to build confidence in the utility of MPS-based models. One of the most striking outcomes of the workshop was the recommendation to close the communication gap between all stakeholders involved.

EUROoCS is seen as the leader in achieving the goal of providing a worldwide communication platform for these stakeholders.

*A report of t4 – the transatlantic think tank for toxicology, a collaboration of the toxicologically oriented chairs in Baltimore, Konstanz and Utrecht sponsored by the Doerenkamp-Zbinden Foundation. The present report is the output of a three-day workshop sponsored by Center for Alternatives to Animal Testing (CAAT) Europe held in Berlin (Germany) on June 18-20, 2019. The debates were based on scientific discussions among the participants, without necessarily unanimous final agreement.