The first conference of the European Organ-on-Chip Society (EUROoCS) in Graz in Austria on the 2nd and 3rd of July this year was a great success. The impressive old campus of the Graz University of Technology, with its nice Lecture Hall and the historic Aula in EUROoCS colors, was filled with 214 enthusiastic participants from 18 different countries, those from the Netherlands and Germany leading in number. The newest results in the Organ-on-Chip field were presented in 6 keynote lectures, 32 abstract selected talks and 96 high quality posters, indicating the growing interest in contributing to this area of research. 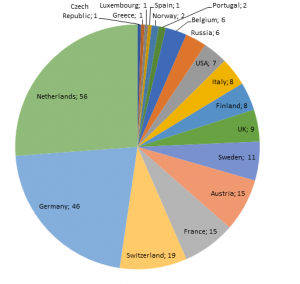 Keynotes
Six keynote speakers from academia and industry presented their latest views on different topics, ranging from the development of organoid-based models of the healthy and diseased brain and intestine to the role of Organ-on-Chip in precision medicine, clinical use and drug testing.
Roger Kamm (Massachusetts Institute of Technology, USA) presented three brain models, that are used to study neurodegenerative diseases, brain cancer and ALS, and to screen new therapeutics. Maxime Mahé (Inserm France and Cincinnati Children’s Hospital Medical Center USA) introduced a complex human stem cell derived intestine model, including an enteric nervous system, that paves the way for precision and regenerative medicine. Richard Peck (Roche Pharma Switzerland) addressed the potential of Organs-on-Chips to select the best type and dose of drugs per patient, thus contributing to precision medicine and improving R&D success rates.

Anna Herland (KTH/Karolinska Institute Sweden) created a Neuro Vascular Unit-on-Chip and described the use of this system for studies on drug-induced blood-brain barrier alterations and penetration of biopharmaceuticals. Geraldine Hamilton (Emulate USA) focused on the importance of qualification of Organ-on-Chip models for safety assessment using the right reference compounds and presented a glimpse of Organs-on-Chips in space. Stefan Kauschke (Boehringer Ingelheim Pharma Germany) highlighted the chances, challenges and open questions of Organs-on-Chips from the perspective of the pharmaceutical industry end user.

Something for everyone
During each conference day two parallel sessions were scheduled, that started with a selected talk followed by 8 shorter presentations. Young talents from academia and industry gave inspiring talks about their research in the 4 session topics: Materials, analytics and in-line sensing; Healthy tissue models and safety testing; Integration of immuno-aspects; Disease modelling and efficacy testing.
The posters were exhibited during the whole conference and attracted many scientists, resulting in animated discussions and new collaborations. In fact, this is the aim of the EUROoCS conference: to provide a platform for an interdisciplinary scientific exchange. 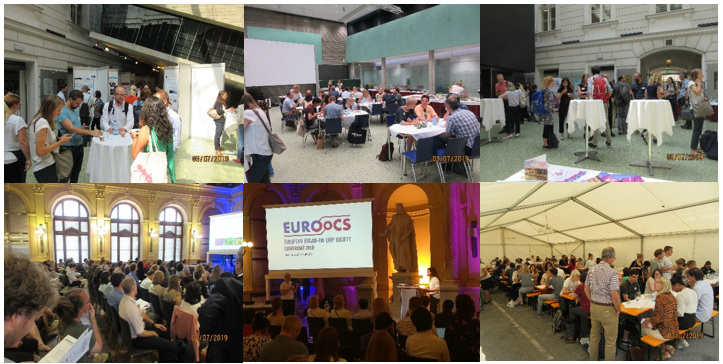 Concentration and active discussions during poster session, breaks and dinner.

EUROoCS Awards
During the closing ceremony of the conference a number of young scientists received an award. Travel Awards were offered to promote participation of students and selected from the submitted abstracts by peer-review. The Best Poster Awards were elected by voting of all participants in the conference. The Best Talk Award was chosen by the scientific committee and the session chairs (more awards info).

Become a member of EUROoCS!
Christine Mummery, chair of EUROoCS, informed the audience about the importance and the benefits of the EUROoCS membership. She inspired the participants to become part of an expanding network of experts in the field of Organ-on-Chip. Exclusive access to the digital platform of the EUROoCS website enables members to find information and connect to collaborators via the Forum. Every member can update a profile and expose their research results, projects, jobs and publications at the website. The Organ-on-Chip community is by you and for you! 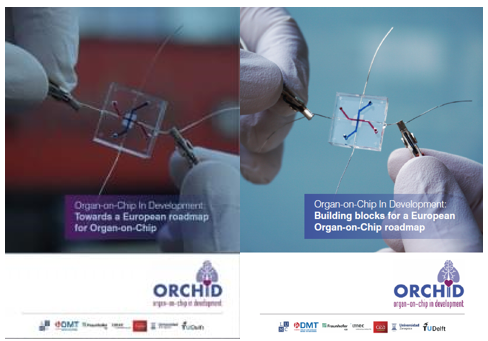 The two ORCHID brochures about the Organ-on-Chip roadmap

Many thanks
EUROoCS 2019 was an amazing experience in a very welcoming environment with excellent Styrian wine and good music, perfect for many new friendships, thanks to the fantastic local organization by Torsten Mayr and his crew from TU Graz. It will be a challenge to continue this atmosphere of an incubator of new ideas and initiatives, collaborations and open discussions in the future.

Thanks to Torsten Mayr and his crew from TU Graz.

Photo Impression
You can download the booklet with the program here, and lecture-poster abstracts here (password restricted for meeting participants).
Look here for a photo impression of the symposium.