Maria Kitsara graduated from the Materials Science and Engineering Dept., University of Ioannina in Greece in 2004. She received her MSc degree in Polymer Science from the Dep. of Chemistry, University of Athens in 2006 and her PhD in 2010 for work in the development of optical biosensors, conducted at NCSR “Demokritos” in Athens. After a post−doctoral post in the same center, she joined the Microfluidic Platforms Group at Dublin City University as a post−doctoral researcher doing research in the area of centrifugal microfluidic lab−on−a−disc systems for bio−applications. After she joined the Chemistry Dept. at Ecole Normale Supérieure in Paris as postdoctoral researcher working in the development of scaffolds for cardiac tissue engineering. On October 2014 she was awarded with a Marie Curie COFUND postdoctoral grant and joined Barcelona Microelectronics Institute for research on the implementation of polymeric lab−on−a−chip devices for diseases diagnosis. On February 2017 she was awarded with a post−doctoral grant from the French National Research Agency and joined IBPS at Sorbonne University, where she is working on the development of biomimetic scaffolds for cardiac disease modelling and therapy.
She is author of 26 articles in peer-reviewed journals, 12 conference proceedings and 3 book chapters. In addition, she has 29 presentations in international conferences and is holder of 3 patents (2 of them extended to international), while she worked in 11 research projects. 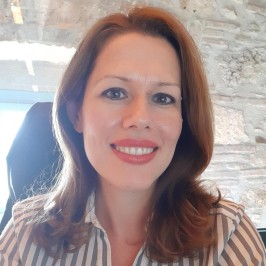