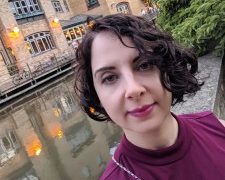 Dr. Pelin Candarlioglu is a cell biologist by training which she obtained from Sabanci University in Istanbul and subsequently moved to Vienna in 2005 with a Marie Curie Fellowship to study bone tissue engineering in Ludwig Boltzmann Institute for a year. Later, Pelin took a break from tissue engineering and focused on proteomics during her master’s degree and spent many long days in the mass spectrometry room in Vienna University of Technology. Albeit there hasn`t been a chance again to work on proteomics since then, her interest in the field still remains.

Pelin returned to tissue engineering field in 2009 with a PhD at Imperial College with Prof. Molly Stevens. However, after working for years on this topic, her interest shifted to oncology which has been another ongoing scientific curiosity for years which led to the Postdoc position about capturing and culturing of circulating tumour cells (CTCs) at the University of College London. Since CTCs are also a type of rare cell in circulation, that experience paved way to her position at Enplas Corporation where she was responsible to move the company first time to a biology setting by creating and leading a cell
biology/microfluidics lab. First project was to develop a microfluidic solution to capture circulating fetal nucleated red blood cells, another rare cell in circulation, for non-invasive prenatal testing. However, this short-term project was replaced with her initiative to an organ on chip project, developing a microfluidic chip system specifically designed for immune-oncology applications for which the patent is pending.

At that point, Pelin left her lab to the capable hands of her colleagues and moved to GSK to oversee the Organ on Chip development projects. Pelin`s role at GSK in Complex In Vitro Models (CIVM) group is utilizing her expertise in microfluidics, tissue engineering and especially Organ on Chip to lead multiple initiatives both externally and internally to expand the complex in vitro model portfolio of GSK for immuno-oncology as well as barrier/epithelial models. Pelin is also responsible to oversee the 3Rs initiative of GSK from in vitro and replacement side and she is representing GSK globally in relevant organizations such as NA 3Rs, IQ-MPS, NC3R, OOAC in UK and EUROoCS.