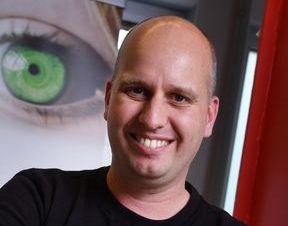 Dr. Andries D. van der Meer is an Associate Professor at the Faculty of Science and Technology of the University of Twente, The Netherlands. He is the leader of the Organs-on-Chips research theme in the Applied Stem Cell Technologies group of the Bioengineering Technologies cluster, supervising six Ph.D. candidates and coordinating multiple national and European research projects on the development and application of organon-chip technology.

Before joining the University of Twente in 2015, Dr. Van der Meer worked as a Senior Research Fellow at Harvard Medical School and the Wyss Institute for Biologically Inspired Engineering of Harvard University, Cambridge, MA, USA. He actively developed organ-on-chip models of the blood-brain barrier and the alveolus for the Defense Advanced Research Projects Agency (DARPA) Microphysiological Systems program and coordinated a collaborative project between the Wyss Institute organ-on-chip start-up company Emulate, Inc. and Janssen Pharmaceuticals. Before joining Harvard University, he was a Post-Doctoral Fellow at Prof. Albert van den Berg’s BIOS/Lab-on-a-Chip group of the University of Twente, The Netherlands. During that time, he also served as an Assistant Coordinator for the project ‘Beyond Borders: Organs-on-Chips’ of the Dutch Royal Academy (KNAW). This project led to the founding of the Dutch Human Organ and Disease Model Technologies (hDMT) Organ-on-Chip consortium, for which Dr. Van der Meer is currently his university’s representative.